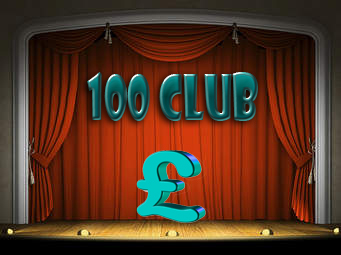 Welcome to the Rossendale Players monthly cash draw known as ‘The 100 Club’. This is a fund-raising enterprise for the Players with a cash prize won by a ticket holder each month.

An annual ticket costs just £12 and will be entered into each draw, the prize fund for each month will vary according to the number of players but will be announced alongside the winning ticket number.

The monthly winner will be announced on this website and also shown with the play programmes.

Funds raised contribute to the running of the theatre and production costs of our plays. Join today and help to keep the Rossendale Players productions in the spotlight!

The following list contains the winner for the previous 12 months.

It is not possible to enter on-line, you can however request to renew or join. A member of the theatre will be in contact with you shortly.

Designed and developed by Jonathan Madeley and Alan Doherty

Back to top of page